In 1919, the world was in the grip of a global pandemic. The 1918 – 1919 Influenza Pandemic – often referred to as the “Spanish Influenza” – is thought to have killed between 40 – 50 million people worldwide. Like the current COVID-19 virus, the pneumonic influenza was highly infectious and spread rapidly. There was no vaccine to protect against infection, and control efforts worldwide were limited to non-pharmaceutical interventions such as isolation, quarantine, good personal hygiene, use of disinfectants, and limitations on public gatherings.

In 1919, the influenza pandemic had a profound effect on our two Schools. The first entry in the Rose Bay School Journal for that year read:

Outbreak of pneumonic influenza in Sydney. The schools were forbidden to open. Our rentree [start of term] was finally fixed for March 3rd. Only 38 children came. Country parents were too frightened to send their children.

The Order of Day [the daily timetable] was considerably modified for a time.

Kincoppal experienced similar disruption to the start of the school year, with its School Journal recording that the start of the school year on March 4th was “late on account of the epidemic”. On March 31st, students were told that anyone who wished to return to school had to do so as a full boarder, due to the increasing seriousness of the epidemic. Nineteen students remained as boarders, and the others undertook their work at home, sending it back every week. The Journal records that “Outsiders were not let in” and family members and friends were advised that they could not enter the school.

The disruption to the school calendar at both schools continued for several months, with term dates changed and student numbers down until the middle of the year. Obviously, the students and teachers of 1919 didn’t have the same technology available to them as we have in 2020 – 21, so the disruption to learning would have been profound – no Zoom classes, Facetiming your friends, online fitness sessions, or Wellness Wednesday and Fun Friday activities! 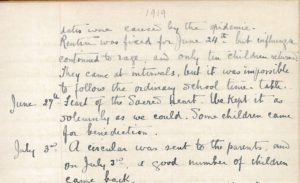 The Rose Bay School Journal records one case of influenza among the student body in 1919; happily, that student survived, and it appears there was no transmission of the virus to any other member of the school community. At Kincoppal, two cases of influenza were reported on 12 June, and on the advice of the doctor, the students were all sent home for their Midwinter holidays.

By July 1919, most students had returned to both schools. Feast days, sporting contests and important events such as the Ceremony of First Communion were reintroduced to the school calendar as school life resumed its familiar rhythm.

We often say, “history repeats itself”, and we can see many similarities between the influenza pandemic of 1918 – 1919 and the current COVID-19 pandemic, including many of the measures taken to restrict the spread and transmission of the viruses.

By the way, the “Spanish influenza” didn’t originate in Spain, but news coverage of it did, hence the name. Spain was a neutral country during WWI, with a free media that covered the influenza outbreak from as early as May 1918. Allied countries and the Central Powers had wartime censors who covered up news of the flu to keep morale high. Because Spanish news sources were the only ones reporting on the flu, many believed it originated there (the Spanish, however, believed the virus came from France and called it the “French Flu.”)