On Monday, 24 October KRB had the pleasure of hosting Alumnae who had graduated from Kincoppal, Rose Bay and Kincoppal Rose Bay 50 years ago or more, for our annual Sandwiches and Song event.

Commencing with morning tea in the Performing Arts Centre, attendees were met by the KRB 2023 Leadership Team who helped served morning tea and mingled with our guests.  The Ladies then moved to the Chapel for a Liturgy including prayers, readings and a time for reflection.  Year 10 students, Lucy Bowden and Taylor Hamilton, began the liturgy with an Acknowledgement of Country where they included their own personal experiences of the time they had recently spent at an immersion in Arnhem Land.   Our Soloist, Josie Ryan (daughter of Ann Ryan, K 1948) led the congregation in the Hymn to Mater Admirabilis, and both the Kincoppal and Rose Bay school songs.  The Liturgy was concluded with the singing of Les Promesses de Sacre Coeur.

Our guests were then welcomed to the MTC for the “Sandwiches and Song” luncheon.  The ladies were greeted with a glass of champagne on arrival and beautiful soloist performances from Annabel Mills (Year 7), Isabella Gilchrist-Pretel (Year 11) and Myfanway Hill-Caulfield (Year 11).   Principal Maureen Ryan then welcomed guests and acknowledged several reunion groups from the Classes of 1952, 1956 and 1957.  After lunch, grandchildren, grandnieces and relatives of our guests who are current students at the school, joined their family members at the MTC.

Pictured below is Margaret Ward (Lenehan, RB 1957) with her granddaughters and grandnieces. 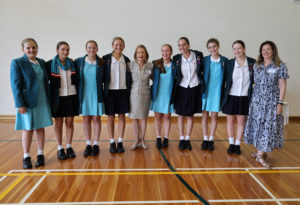 Reunited also at the event, were the three Oxenham Sisters who attended Kincoppal in the 1940’s and 1950’s.  All three sisters were Head of the School at Kincoppal – Mary Makinson in 1946, Ann Ryan in 1948 and Ruth Lynch in 1950.   They are pictured here in front of the Honour Board recognising all past Heads of the Kincoppal. 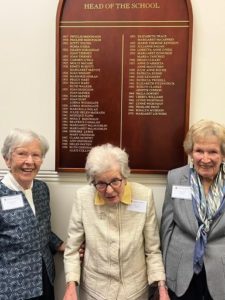 Raffle prizes were drawn and beautiful hand painted cards of the main buildings at Kincoppal and Rose Bay, were available for purchase.   These cards had been produced by Alumna, Rosie Macken (1987).

The Advancement and Community Team would like to thank the Mission Department, Music Department, Georgina Senes and the SCA committee members who assisted on the day.