As many, the KRB community eagerly followed the Tokyo 2020 Olympics, held this year during the lockdown in Sydney. It was a positive distraction for many students and families as they started remote learning for the second time since the COVID-19 outbreak.

Our Sports Department kept our community up to date with key events to watch, and students showcased their Olympic Spirit with special decorations and dress ups during their Zoom lessons. We are blessed to have a talented and diverse workforce at KRB – including a few Olympians within our Sports Department! Each staff member brings a high level of expertise and passion to their sports which is then illuminated throughout students. 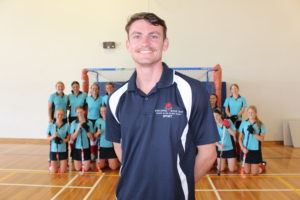 Dylan Martin is a hockey coach at Kincoppal-Rose Bay and our most recent Olympian: he competed for Australia in hockey at the Tokyo 2020 Games. Dylan, a 23-year-old defender from Wagga Wagga, won a silver medal after the Kookaburras were defeated by Belgium on penalties in the gold medal match.

“Obviously it would be a lifelong dream (to win a medal). But what really makes it different to me is to be a part of such a successful squad that has a lot of potential – to not just be a part of the Olympics but to aim for gold. I may get an opportunity that most people don’t.”

Hamid Mobarrez, Head Swim Coach and Pool Manager at Kincoppal-Rose Bay, and father to Eli-Luca in Year 3, is a former professional swimmer. Hamid represented Iran in swimming at the 2000 Olympics and held Iran’s national record for the 100 metres butterfly with a time of 55:84 seconds. Since starting at the school in June 2014, Hamid has been the driving force behind the school’s swimming program, taking a hands-on approach at our modern on-campus indoor swimming pool.

“My favourite moments at the games were when I met my sporting idols, including Michael Klim and Ian Thorpe of Australia in swimming. I also got to meet Michael Jordan, he was a big athlete. I hope our students aspire to reach the Olympics in 2032.” 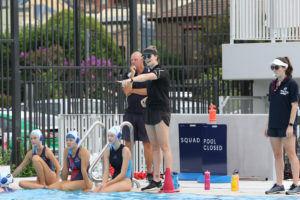 Ash Southern is a Sports Assistant at Kincoppal-Rose Bay and enjoys coaching our water polo teams – and she is well-credentialed!

“I have competed in two Olympic Games – London 2012 and Rio 2016. I was the highest goal scorer for Australia at both Olympics. I was in the top seven players in the world in 2016 and played professionally in Greece for Olympiacos.  We won a bronze medal in London, where I was the youngest water polo player to debut at an Olympics at age 19. I was again the youngest player in Rio in 2016 at the age of 24. We got knocked out in the quarter-finals against Hungary.  London and Rio were two very different experiences with many highs and lows. I spent all of my time out of the pool star-spotting famous athletes. My favourite memories from the two Olympic Games are both opening ceremonies and coming away with the bronze medal in London.”

With mentors such as these and outstanding sports facilities at Kincoppal-Rose Bay, Brisbane 2032 is in our students’ sights.