Participants were asked to consider the impact that the Arts in its various forms, or the lack of it, can have on the mental health and wellbeing of women.  The prize was open to all medical students and trainees at any stage of their education. The title of Jessica’s essay was “How can the arts shine a light on women’s wellbeing and mental health?”

Jessica graduated from KRB in 2011.  She excelled in Visual Arts and Biology and achieved merit awards on the Principal’s Honour List for excellence in photography.  Her photography skills were acknowledged externally with one of her original images selected as the cover design for the 2012 Cambridge Biology textbook!  Jessica is an exceptional snowboarder and also represented the school at both State and National Championships. 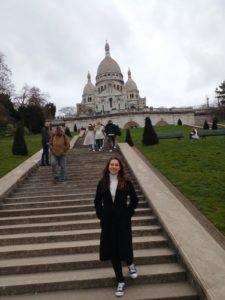 After graduating from KRB, Jessica completed a Bachelor of Arts degree, majoring in Psychology and Philosophy at Sydney University.  She then went on to complete a Masters of Arts in Bioethics and Medical Ethics at New York University.  She completed her thesis on the ethics of forcing people with addiction into treatment. Jessica is now studying for a Medical Degree at the Royal College of Surgeons in Dublin, Ireland. She is in the penultimate year of her degree and her goal is to become a psychiatrist.

Jessica is particularly interested in women’s health, especially since attending the 62nd United Nations Commission on the Status of Women while living in New York City.