Shayne Brown AM (Rose Bay, 1964) recently wrote a book which emanated from her Masters thesis entitled Hindsight: the History of orthoptics in Australia, 1931-1960. 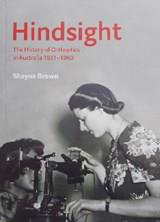 By 1960, orthoptists ran orthoptic education and the practice and science of orthoptics had advanced, largely due to the research conducted by orthoptists themselves.  Hindsight covers this history of orthoptics and within the book are the histories of a number of Alumnae who trained and worked as orthoptists during these years. They are as follows:

Shayne is now a retired orthoptist. During her career, Shayne worked in clinical practice, academia and administration Shayne has published over 40 papers and co-authored a book on orthoptic and related topics. Shayne was Australia’s representative on the International Orthoptic Association from 1975-1983 and the President from 1983-1987.  In 1979, Shayne was made a Fellow of the Orthoptic Association, followed in 2021 by her appointment as a Member (AM) of the Order of Australia (General Division) in recognition of her contribution to the orthoptic profession in Australia.